Hydrogen as an alternative energy source will play an important role in the future due to the decentralization of energy supply systems and declining oil reserves. The stored energy in hydrogen can be transformed into utilizable electric energy by fuel cells.

Generally speaking, a fuel cell works as follows: molecular hydrogen, which is led to the anode, splits by disposal of two electrons into H+- ions. While electrons are used by an external electric circuit in order to produce energy, H+-protons diffuse to the cathode through an electrolytic membrane. At the cathode, the protons and the recirculating electrons react with oxygen from the air yielding water.

In order to guarantee optimal supply of oxygen to the cathode and removal of emerging water, a so called gas diffusion layer is installed between the cathode and the air supply channel. Usually, this layer is a nonwoven made of carbon fibers and a micro-porous layer made of carbon black. To enable water removal, the layer is made hydrophobic.

Within the research cooperation 'OPTIGAA 2' supported by the BMBF, the Fraunhofer ITWM works on modelling of gas diffusion layers using the Software GeoDict and computing material properties like flow resistance and effective diffusion.

Change of material properties subject to varying water saturations of the diffusion layer are of special interest. Saturation dependent material parameters can be identified in an easy and efficient way by the pore morphology method. 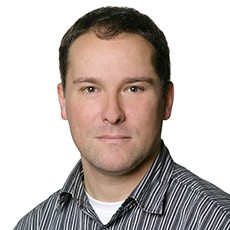