The Fraunhofer ITWM offers its employees helpful support in reconciling family and career with a day-care center directly at the institute, a parent-child office for care shortages and flexible working hours models. In addition to scientific excellence and personal development opportunities, these conditions for an individual work-life balance play a role in the steadily increasing proportion of women at the institute. The Financial Mathematics Department stands out with a 50 percent share of women employees.

The Financial Mathematics staff develop and implement mathematical and statistical models in the areas of auditing, pension schemes and life insurance, as well as for flexible loads on the energy market. The methodological guidelines lie in data science and financial mathematics. In addition to the classical statistical and financial mathematical methods, machine learning methods are often used. These are the basis for many applications in the field of artificial intelligence (AI). These topics also inspire women mathematicians: 11 of the 22 employees of the department are women (as of April 2020).

This article was first published in the newsletter of the European Women of Maths.

One of them is Dr. Elisabeth Leoff. After completing her doctorate at the TU Kaiserslautern in 2016, she took up a position as a scientist in the department of Financial Mathematics at the Fraunhofer ITWM. In her daily work, she focuses on two topics: accounting verification and conspicuity detection in the health care sector, and portfolio control and risk management for insurance companies.

Another decisive factor in Leoff’s decision was the opportunities offered by the department of Financial Mathematics and the institute to combine her job with the care of her two children of kindergarten age. “Mobile working was already possible in our Financial Mathematics department before Corona. For me, the option was particularly good when one of our children was ill. Then I work from home in the mornings and see how much I can manage for work in addition to looking after my sick child. And when my husband comes home in the afternoon, I go to the office and do what I need to be there for. There is a large understanding of such matters in our department, that’s really great.”

Leoff’s two children are looked after in the Klammeräffchen daycare centre, which is located in the same building complex as the Fraunhofer ITWM. “I am very grateful for the fact that we have been able to get a place in the daycare centre for our older son and then also for the sibling. One should not underestimate the importance of a daycare place for parents. I often hear stories from other families that they are searching for places in vain. In addition, the daycare centre is really great and my children love going there.”

In addition to the adjoining daycare centre, there are other facilities for parents at the ITWM: for example, the parent-child office. A workplace equipped with games, a changing table and a cot is available for all employees. If there are bottlenecks in the care of their children, for example on closing days of the daycare centre or if grandma or grandpa is ill, the employees can bring their children to the institute.

Young female scientists in the field of artificial intelligence (AI)

Dr. Stefanie Schwaar has been at the Fraunhofer ITWM for one and a half years and since the beginning of this year she has been taking over the function of business area developer in the department of Financial Mathematics for the business area of accounting verification. She is a product owner in several of the consistently agile project teams. She works full-time and shares the care of her two children with her husband. Schwaar supervises the children in the mornings before school and the daycare centre, working longer in the afternoons or sometimes even in the evenings from home. “The new communication channels and digital tools that make it possible to be part of a meeting from home make life easier for me and many of my colleagues. In fact, I find it better if a large part of the team uses mobile working instead of just one or two people, as it makes it more natural for everyone not to plan with the constant presence of all team members.”

Schwaar appreciates the personal responsibility and the trust that is placed in the Financial Mathematics department with regard to flexible working hours. She also finds the balanced ratio of men and women in her department a clear enrichment: “I find it very nice to work in mixed teams. A team with men and women of different ages creates a very pleasant working atmosphere”.

Over the summer, Schwaar will use funding from the German Federal Ministry of Education and Research to establish a research group explicitly for young female scientists in the field of artificial intelligence (AI). The aim of the funding is to increase the visibility of Germany, of women in AI research and to increase the proportion of young female researchers in AI research through the funded junior research group. New staff will be recruited for this research group – women will be given preference if they have the same qualifications.

Dr. Andreas Wagner has been the head of the Financial Mathematics department since 2015. For him, part-time work and mobile working are well suited to the requirements of his department: “Since we work on a project-related basis, it works very well that the employees are flexible in their time allocation. Whether one works from 8 a.m. to 4 p.m. or from 10 a.m. to 6 p.m. or only in the evening is not decisive for the success of the project”.

For the employees, the decision to work part-time does not have a negative effect on their career opportunities either: “Project-based work with us also means that there is no structural disadvantage, regardless of whether you work 50 percent, 60 percent or 80 percent. You simply take on fewer projects a year, but they are no less demanding or responsible.”

Attractive prospects for women scientists in mathematics and at Fraunhofer

The fact that the department of Financial Mathematics, for a natural science institute, has an exceptionally high proportion of women was not a conscious decision, says Wagner: “The high proportion of women in our department was a coincidence. We had recruitment rounds, where three women were hired and three men in the next round. We hire the person we think will fit best the position and the group.”

For the year 2018, the Fraunhofer ITWM shows a share of women in the scientific sector of 17 percent, in the technical-administrative sector of 69 percent. Especially in the scientific area, this percentage is still very low but it has been rising for some years now and the institute is trying to increase the number of women here. With the TALENTA funding and development program, Fraunhofer aims to attract, develop and retain more women for applied research. Elisabeth Leoff was also supported with this program: “On the one hand, the funding enabled me to take one or two months more time to publish and on the other hand I was able to attend quite specific training courses that have brought me a lot” says Leoff, describing how she has benefited from TALENTA.

With regular events aimed at schoolgirls or students, the Institute strives to attract young female scientists. “In this way, we want to show the young women that they have attractive prospects in mathematics and at Fraunhofer,” says Henrike Stephani, a representative for equal opportunities at the Fraunhofer ITWM. With a share of almost 11 percent, there is still a clear need to catch up on the topic of women in management positions. However, the fact that Prof. Dr. Anita Schöbel has taken over the management of the institute since April 2019 is a clear step in the right direction. 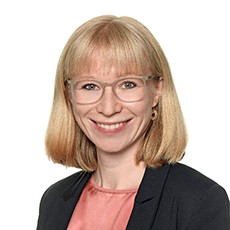