Al-alloys have a higher strength compared to pure aluminum. This is why the Al-alloys are used in many areas of light weight construction. In the project presented here, Al-Si casting alloys are examined, for example, for use in cylinder heads and crankcases.

Since the aluminum and silicon have different coefficients of thermal expansion as the molten mass solidifies during cooling, besides the usual macroscopic residual stress, additional residual stress develops at the microscopic level, the so called type 2 residual stress. These residual stresses, which previously could not be measured, represent high material strain on microscopically small areas and play a major role in crack formation in the castings.

Together with project partners these type 2 residual stresses were measured by means of neutron diffraction separately in each phase of the Al-Si structure and are taken into account, for the first time, in the microstructure simulation developed at ITWM, which enables mechanical properties such as stiffness, plastic flow, and strength to be predicted much more accurately than before. These results can be used to calculate the fatigue of the component.

As the Al-Si molten mass solidifies, the Al-based a phase first form that have a dendritic structure. Figure 1 shows an example of such a dendritic structure that was reconstructed from a computer tomography scan taken at the synchrotron in Grenoble. As the temperature decreases, the solubility of the silicon in the molten mass quickly diminishes, so that tiny platelets or needle shaped Si crystals start to form in the so-called eutectic phase.

Very high compressive stresses were measured in these small Si crystals by means of neutron diffraction. The FeelMath software developed at ITWM enables, with the help of these measured values, the residual stresses ­(Figure
2) and associated intrinsic elasticity (Figure 3) in the entire structure to be determined and any loads to be simulated.

In the example shown here, there is high type 2 residual stress in the eutectic phase, so that it is likely to be subjected to a sufficiently high mechanical load to cause micro-cracking and harmful effects. In this way, a cause of experimental observations could be clarified.

Aim of the Project

The aim of the project, however, is not only a deeper understanding of structural properties, but also a deliberate assessment of the sensitivity of the process parameters, such as the cooling rate and the alloy composition, on the strength of the Al-alloys. 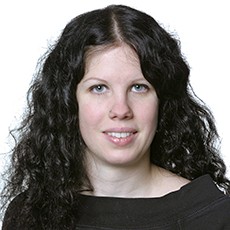